Not to mention that your “screenshot” is so badly done that I’m doubting your technical competency altogether. Here’s a hint: Either use PNG or don’t set the compression factor to 80%. No one can read that.

Look like someone else doing the test and then gave him a report as ms word document. Looking at the ‘screenshot’ alone I also doubt he is a technical guy.

Thank you so much. I will check out this week asap. Appreciated.

Waw. Thank you so much. Much appreciated.

Why would you need 100k concurrent users? And why are you benchmarking on a laptop?

If you’re wanting high concurrency then I would go along with what other people are saying in the article and go with something like Elixir, Go or plain old C. However, even then there’s little chance your laptop will handle 100k concurrent users.

Testing for 100k concurrent users on a Dell laptop is like a blacksmith forging a sword with a butter-knife… Use the right tools.

If you decide to use Meteor then I’d avoid MongoDB as @diaconutheodor makes some good points about oplog tailing above. I’d recommend going with Apollo (GraphQL) and using Redis for speed with something like Postgres for your data integrity (essentically, use Redis as a cache for data that needs quick access).

If you are trying to bench for 100k users, this would take extremely cautious measures in the design of your application (your data structure/schema & pub/sub’s especially) to be able to even attempt that.

Without seeing how you created your project, we are completely in the dark… so how are we supposed to help you?

We would have to see all the pub/sub code in the project, to even start to begin giving advice. And that’s just a starting point. With Meteor (or any other framework) you would need to make many, many drastic measures to support that many users.

That’s why people think you are trolling/are not sure if serious. You are asking for advice, giving us very little to work with, providing very poor quality screenshots, giving far too little information, and testing on a system that was not built to handle such stressful tests.

How is your laptop possibly supposed to emulate a web server that you would use to support 100k concurrent users…? You would likely be deploying on cloud systems with external databases. Your laptop is not comparable!

Wow this is really impressive. I’m so glad to know that you are making Meteor scalable, because I (and I guess a lot of other people) really want to use Meteor in production for big projects.

Keep the good work, we really need it and we appreciate it so much!! Thank you a lot! :))

Please, please, please keep us updated on this. Start an email list or something so that I know when this is coming out.

Update: Release: https://github.com/cult-of-coders/redis-oplog How this whole topic started: Recently I’ve been studying in depth how publications/subscriptions actually work and what I found was a fractal of bad design for scaling. But it’s very ingenious at the same time. Instead of oplog, use redis as our “oplog”. Each insert/update/remove we do in a Mongo.Collection at app level, will be pushed to redis as well. Each publication will “subscribe” to redis’ changes and update the local co…

Here is my draft code: 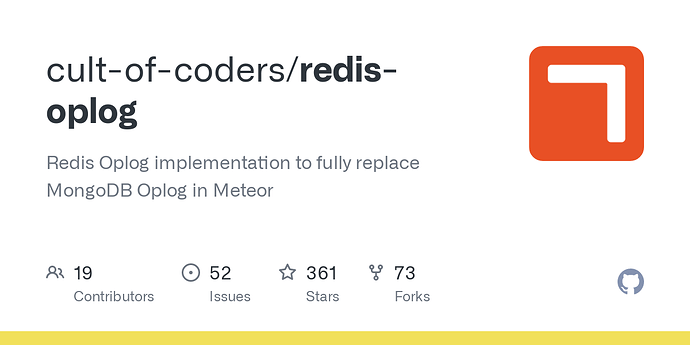 Not reliable, not working for now, it’s more than I expected

but the POC is done. It just works smooth as butter

Out of curiosity, what made you decide on the NPM redis package, rather than slava:redis-livedata and slava:miniredis?

Thanks to a lot of people here who shared very good constructive help and hints. I will continue my IT deep investigation with node.js and Meteor. If I will finish my testing and technical investigations, happy to share it with you all.
BR, Mohi

The responses here are rude and ridiculous.

Only a handful of helpful ones.

Yes, you will struggle to scale Meteor past 1000 concurrent users. We run 20 or so 512MB instances on DO and we can deal with a few hundred concurrent. Hitting around 700 or so and it’s been a struggle to get there.

Elixir is a good option if you want to scale massively and might be a better option than Meteor if you need to hit big scale.

And to those asking why you’d want to hit 100,000 users, the answer should be obvious, but if you ever have a popular website you’ll want that. Of course there’ll be scaling challenges no matter what platform you use, but I can’t really fathom someone handling 100k concurrent with Meteor atm.

Thank you so much Elie, for the respect and for deep understanding for my initial thread. I totally agree with you. 5 years ago we did a similar load-testing with Government web-application based on Java enterprise framework and a lot of open source tools. It was really tough and a struggle, clustering Oracle db with JBoss and later we finally reached that using IBM Web-sphere, configuring the application server with commercial expensive load-balancer. It was really tough job scaling that web-application on that technologies, at that period of time.

I will check with your recommendation about Elixir. Again many thanks.

Give this a read.

I’m subscribing to this thread

@rhywden - you could tone it down a bit, i’ll second that opinion
@diaconutheodor - awesome - whether Redis or which technology is not the point, correct? Your improvement, if I am restating it correctly, is that you can push out diffs sooner by bypassing the Mongo layer is that right? Then tailing the oplog becomes redundant because the app maintains its own list of invalidations.

You get the idea but It’s way more than that. The diffs indeed may arrive sooner than with oplog, bc pub/sub of redis == killer speed, but there is so much more, namespacing, channels. No more “processing” information we don’t need. We can finally build chat apps in Meteor, that are as fast as we would code them from scratch in an express() + websockets + pub/sub system + cpu & memory friendly

+ It is database agnostic, meaning we could finally have reactivity on MySQL/Oracle/etc for now just focused on Mongo.

All the best for you guys in this project. But, I’m in doubt that MDG is desiring to help out with this. For obvious reasons…

All this talk about making Meteor scaleable reminds me of the early days of Ruby on Rails. I’m hoping to see the same explosion and level of impact on web development sometime very soon.

It already started. Redis Oplog was the first step of the equation, I’ve finished the main functionalities, I am now working on writing tests to make it stable.

@aislan
Apollo Competitor ? I don’t really know about that. I just want to make Meteor great.

I’m also planning on load testing our services before launch. Would it be possible to hear more on how you implemented the testing with jmeter and possibly see some testing script(s)?