I will give as detailed of an explanation as possible…

The directory where the stylesheets are located looks like this: 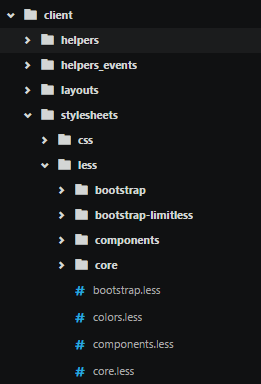 As is required with the newest version of Meteor, I renamed each file in the sub folders with the .import.less extension.

To import the less files, I added the @import designations to the files at root of the folder. For example, bootstrap.less looks like this:

However, the stylesheets are not importing correctly to client, so I must have done something wrong here. I tried setting the path to an absolute path like /client/stylesheets/less/bootstrap, but it still doesn’t render correctly on client.

Yes, I have the latest bootstrap and less compiler all installed. Not sure what it is, as I’ve tried everything I can think of. If someone can point me in the right direction, I would greatly appreciate it.

Can we please restrain from naming forum topics in the way of “Meteor is at fault” when we’re not sure of that? It makes a really bad impression for people who check out forum to get an opinion if they should try Meteor or not and I can imagine some blog comparison of Javascript frameworks quoting this title with an argument like “Meteor can’t even use CSS preprocessors”.