Maybe the Light and Dark side will come together just like HTML/CSS/JS in React?

Or will there emerge a 3rd side like Blaze/React/Angular? (My life before Meteor - formerly working with ‘Imperial Django’, sweating in the desert)

May the forks be with you.

These aren’t the droids you’re looking for!

But this is the Galaxy invitation link you’re looking for, click it and sign up for Galaxy Developer Edition (Jedi waves hands over monitor)

The Radicalization of Luke Skywalker: A Jedi’s Path to Jihad

You may find yourself surprised by how much the original Star Wars trilogy’s characters and themes echo the current War On Terror. 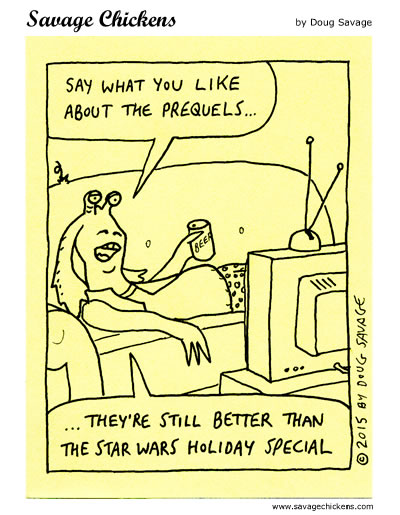 <11 hours till I see it! has anyone watched it yet?

Quite cool for 126 min blockbuster.
I mean, many things being highly advertised through this year were failure.
Things like transformers make me sleep even during the most intensive fights(not speaking of useless talks)
Starwars are opposite, at about half of a movie i thought “hey, 5 min left or so, isn’t it? 2 hours should’ve past”

Movie is really full of action. It feels “finished part” rather than “cut” as it was for Hobbit

JJ Abrams hasn’t put out a movie I haven’t liked.

It’s everything we could have hoped for. The whole movie theatre was so dazed from the movie that nobody moved until the lights came on.

I busted my back doing a 15 meter water jump… had ambulance and all… first day off pain killers after a week. It still hurts - but I forgot all about 30 minutes into the movie.